As a result of bidding, the negotiation enables the supply of Tibero, TmaxSoft’s database, with the objective of supporting the applications of the legacy environment and the migration of new applications to this environment. Sabesp contracted Tibero Enterprise Edition 6.0 and Tibero Active Cluster (TAC) licenses. The investment in the technological solution in 2016 was over R $ 2.3 million and for 2017 the value is R $ 3.3 million.

Developed internally by Sabesp’s Collection Department, the SIC system started operating in 2000, based on a database that, until then, had met the company’s demands. Over the years, new features needed to be included, which required the evolution of the adopted solution that no longer supported them. Even because it is an old version, the database no longer had the technical support of the manufacturer, a feature that represents a great risk for the company.

Sabesp decided to start a bidding process for the migration of the environment and, in 2016, the company opted to update the database by opening a bidding process which Tibero won. After one year of using the TmaxSoft database TmaxSoft, Sabesp identified the success and stability of the SIC, as there was no impact whatsoever, which provided a security environment to be able to migrate other applications.

Taking into account this positive scenario with the acquisition of the TmaxSoft solution, after one year, Sabespdecided to migrate more systems and increase the Tiberoenvironment by hiring new licenses. In fact, the company opted for a high availability environment when using the Tibero Active Cluster (TAC), which provides business continuity without risks and with high performance.

The solution hired by Sabesp is a new database option for the Brazilian market, as it has local support, integration with other suppliers’ versions, lower cost and quick migration.

Nalbatech, TmaxSoft do Brasil’s business partner, was the winner of Sabesp’s bidding process and was responsible for supplying licenses, implementing and supporting the Tibero project on the company’s systems.

Nalbatech carried out the total migration of data to Tibero in just 1h30, without risks or major changes in the codes and with the SIC running at full performance.

In addition to enabling the evolution of the system and having the technical support sought by the company, the solution offers the possibility of simplified and accessible virtualization, another objective of the Sabesp team. The solution allows virtual environment licensing without the need for physical environment licensing,which reduces costs, since there is no need to invest in hardware and new licenses. This is a differential of TmaxSoft compared to other options on the market. In short, the adoption of Tibero brings several benefits such as: 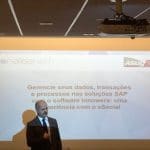